It’s Santa Fe, New Mexico, at Easter. How can I refuse an invitation to walk the eight miles from the tiny village of Nambé to el Sanctuario de Chimayó? It’s the largest annual pilgrimage in America! Why would I miss that when I’m house sitting in Santa Fe at exactly the right time of year?

There are many starting points for this famous religious trek to Chimayó. Some devotees reputedly start at the Mexico border; others set off from Albuquerque about 91 miles away; some begin at the Santa Fe Plaza and walk for 28 miles.

And then there’s the option of the eight-mile route I took, on a paved road with wide shoulders, through the Sangre de Cristo foothills.

All these routes end at a very special church built in a mountain valley between 1813-1816. In that church, in a tiny room that you have to duck your head to enter, is a small pit in the dirt floor with soil reputed to have healing powers. There are many, many stories of the miracles that happen with that soil.

So how can I not do this pilgrimage, even though I’m not Catholic?

I arrive with a friend, Carol, at the planned gathering site, the Nambé church parking lot.

There we meet our superb group organizers, Pauline and Richard, and members and friends of the Albuquerque Chapter of the American Pilgrims of the Camino. We’re walking to Chimayó on Thursday before Easter—a brilliant choice—for Good Friday is the day when many thousands descend on the road, and it’s packed.

When we set off at 9am, I feel calmly ecstatic. The air is cool enough for light jackets; the sky is intense blue; the sun is shining; there doesn’t seem to be too much juniper pollen (an intense allergen) in the air. The fourth toe on my right foot doesn’t hurt for a change! Hey, these are all miracles I’ll welcome today! My body is happy to move at a reasonable pace. It’s a perfect day.

Like on the Camino de Santiago in Spain (which I’ve walked), one of the best things on pilgrimage is meeting other friendly pilgrims. Soon after leaving Nambe, Carol and I pass a mother pushing a stroller. We stop and chat and admire the baby.

Jennie has been walking this pilgrimage since childhood, she tells us. She lives in Albuquerque, and drove up to be part of the Chimayó experience again this year. She wants to give thanks at the church for having this baby. Her grandfather had told her, shortly before he died, that they needed another male child in the family! And here she is with almost 7-month-old Atreyu.

The Support for Pilgrims

One thing that impressed me on this walk to Chimayó was seeing how the Northern New Mexico communities comes together to support this sacred event. Some governmental body assured that were port-a-potties placed conveniently all along the route. Hurray! (When I stopped at one, Carol decided to walk on. I’d catch up with her soon…Not!)

Another grand thing I found on the route to Chimayó was the open-hearted support for walkers provided by local people. Once when I was walking by myself, I heard someone running behind me. No way someone is jogging up this hill, I thought. Am I in some sort of danger?

Suddenly the runner was beside me. I turned—it was a young boy about 11-years-old. He smiled and held out a bottle of water, “Here. This is for you.” A short way behind us was highly polished maroon truck with pallets of water bottles, driven by two proud parents or grandparents. “Thank you! I love this!” I shouted to the family.

The paved road to Chimayó rides over gently rolling hills. Pilgrims walk on both shoulders; cars and trucks either whiz or crawl by, cautioned by signage to be alert to people walking. The landscape is quintessential northern NM—hills dotted with Georgia-Okeeffe-trees and shrubs, dramatic eroded-rock formations, canyons created by millennia of erosion, dry riverbed, dirt roads leading off to somewhere, and barbed wire that denotes the borders of Indian reservation land. And at certain places, you can see snow-capped mountains on the horizon.

At about the seven-mile mark, I saw a curious sight: a small hill with steep sides rose beside the paved road. At the top of that hill was a large white cross surrounded by colorful little boxes. When I came adjacent with it, a man was up there shooting pictures with several impressive cameras.

I thought, Hmm, he got up there somehow….so I too clambered up the sandy hill. Fortunately, it wasn’t a hard as expected. Here’s what I found: 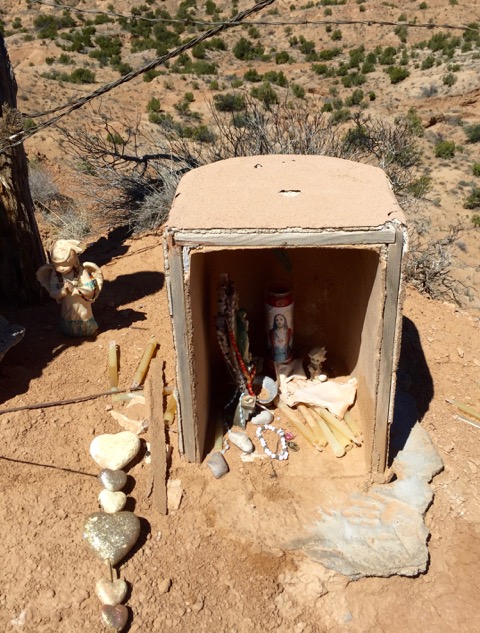 The Sanctuario and Shrine

I went back down the hill, walked on, and a little after noon, I reached Chimayó and its National Historic Landmark shrine and church.

Because the Thursday crowd was much smaller than the one expected on Friday, I didn’t have to wait in line to enter the sanctuary.  It’s an old space, filled with religious carvings and painting–the remarkable art of the people. Appropriately, photos are not permitted inside.

I sat for a time with fellow worshipers and visitors in the pews of that serene, silent place. Then, imitating other pilgrims, I went up to the altar which was lit by a spotlight shining on the crucifix at the retablo. I turned to the left, went through a low doorway, took an immediate right through an even lower doorway, and entered a very small space, perhaps 6’ X 6’.

Three people were lingering there over a small pit in the dirt floor. Two of the women stooped down, and using spoons, they put a little dirt from the pit into ziplock bags. I imagined they’d take the dirt home to a loved one, mix it with a little water and apply it to a wound, or to a belly round with child, or to eyelids. I stooped, too, and ran some of the cool soil through my hands.

The Pageantry on the Plaza

Outside in the sunlight again, on the plaza beside the church, I watched some of an enactment of Christ’s passion. While a woman’s voice, representing Mary the Mother, read a script of the traditional Crucifixion events, young people dramatized the passage of Christ through the fourteen Stations of the Cross. Photos were allowed.

By about 1:30pm, our pilgrimage was complete. Our group gathered at the edge of the plaza and ate the lunches we’d carried in our packs. Then we went to the parking lot where some of us had left cars so we could return by vehicle to the Nambe church.

Driving home, I thought about this unique experience. I don’t think there’s another like it in this country. It’s a combo of Colonial Spain, Old Mexico, and probably Native America. There’s not much that’s Anglo in it.

And truly, the whole event is folk art: it is theater, tradition, belief in miracles, and authentic religious devotion at its most beautiful. I’m so glad I was able to participate in it all.