Note: I’m just now, in Spring 2017, sorting materials I collected on my trip to Europe in August & September 2016; I’ll occasionally post reflections and photos of that trip, dating my posts as if they were written last year.

“I’m puzzled,” I said to the man who sold tickets to Rydal House, the place in England’s Lake District where poet William Wordsworth lived out the last three decades of his life.

“I’ve noticed many Asians tourists here in the Lake District,” I said. “Why? What interests them so much? Wordsworth? Of course, there’s the natural beauty of the lakes, but there’s natural beauty many places….”

The man nodded. “The Japanese use the Potter books to learn English, so they are great fans of Peter and all the Potter characters.”

Gosh, I thought, I don’t even know who the other Potter characters are beyond Flopsy, Mopsy, Cottontail, Mother, and Mr. McGregor. How embarrassing that I know so little about this standard-bearer of children’s literature, for I fancy myself at least an emerging writer of children’s lit.

The National Trust Magazine says one of Beatrix Potter’s books is sold every fifteen seconds, still, 150 years after her birth. Wow.

Thus began my education in the genius and contributions of Beatrix Potter. Her legacy is certainly not limited to being an early worldwide publishing phenomenon as a writer and illustrator—a sort of JK Rowling before JK was even born. Rather, one could argue that Beatrix Potter’s most significant bequest to the world was as a naturalist, conservationist, and philanthropist.

Potter became wealthy, of course, from Peter Rabbit and his friends, but she spent much of her fortune saving 4000+ acres of the Lake District in north-western England from developers. She was one of the early contributors to England’s oh-so-important National Trust, and in fact, one of her childhood friends co-founded that National Trust for Places of Historic Interest or Natural Beauty.

So in September 2016, after I learned that the Japanese flock to the Lake District, I decided I’d be stupid to miss the Potter-exploration opportunity. It was a good year to do that: the town of Bowness-on-Windermere was making the most of Potter’s 150th birthday at its tourist venues. 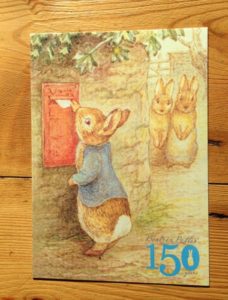 My traveling friend Ginny and I took a boat from Ambleside (where we stayed at a budget-friendly lakeside YHA hostel) down Lake Windermere to Bowness. After a quick exploration of tourist sites there, we ferried across the lake, and by bus went to the villages of Beatrix’s adult life: Hawkshead and Near Sawrey with her famous Hill Top house.

I learned a few things, then and later, about Beatrix (1866-1943). She was born in London to a privileged family, educated by tutors and governesses, and had no conventional/classroom schooling. She credits that upbringing, as well as long family summers in the woods of the Lake District and in Scotland, with promoting her creativity and love of nature.

That information led me recently to an Aha!

I’ve wondered why so many 19th century Brits—writers, scientists, politicians—turned out to be naturalists as well, knowing a great deal about plants and animals. It’s because their education, in addition to covering arithmetic, English, Latin, and European languages, included drawing and map-making! That means that as kids, they were taught to observe carefully, to replicate what they saw, to learn names, to refine the use the small muscles of their hands, to choose watercolors for their paintings. They went to gardens and the outdoors to draw. What fabulous training. I wish our schools did that still.

For example, in the exhibits I saw at the Beatrix Potter Gallery in Hawkshead, as a young child she began experimenting with drawing; by age eleven, she drew complex, narrative scenes with small animals and dense plants. Apparently she also composed stories to entertain herself and her younger brother and collected a menagerie of odd pets, including rabbits.

Sometime in her late teens or early twenties, she began writing and illustrating small books for children, and sought a publisher. The informative biographical movie, Miss Potter, (starring Reneé Zellweger) captures her unrelenting perseverance to find a company that would prepare her book to the high standards she held. And, not surprisingly, she did this creative work while facing resistance from her parents (particularly her unkind mother) with whom Beatrix lived. For that’s what genteel 19th century unmarried women did; they lived with and were supported by their parents.

With no success in finding a publisher, she bravely self-published The Tale of Peter Rabbit in 1901. And then finally her perseverance paid off; in 1902 Frederick Warne & Co took over publication. Peter Rabbit was an stunning success. Soon Beatrix was encouraged to write and illustrate more small books, and in addition, she fell in love with the younger son in this publishing family, Norman Warne. He served has her editor, for he more than anyone grasped her extraordinary gift and originality.

They became engaged, but tragically, unexpectedly, in 1905 before their marriage, Norman died. Shortly thereafter, Beatrix left London for the Lake District. There she purchased a working farm and its old stone house, Hill Top, in the village of Near Sawrey, a few miles above Lake Windermere. For the remaining years of her life she maintained that farm, designed and planted its extraordinary garden, bred an unusual breed of Hardwick sheep, and used Hill Top as her writing studio rather than as her living space.

When Beatrix was 47, she married a Lake District lawyer, William Heelis, and proceeded to buy up many farms and landholdings in the area—much against the wishes of land developers.

What Beatrix’s purchase of property has done is huge. It ensures in perpetuity, that under the administration of the National Trust, at least a substantial section of England’s marvelous Lake District will retain in its unspoiled beauty. If you ever get a chance to visit, don’t pass it up. It will take you back to a time when almost everyone treasured nature and lived in harmony with the land.

When Ginny and I visited Beatrix’s home/studio, Hill Top, late on that September afternoon, the gardens were blooming**. The house was beautifully preserved— its rooms and windows are small; the wood throughout is dark; and Potter’s personal treasures are spread about, beautiful and often tiny. Tourists are on timed tickets to avoid overcrowding, but the press of the crowd still makes it challenging to see things.

I came way from my half-day Beatrix Potter experience feeling humbled: I realized how for years I’ve been dismissive of and blind to the importance of  her books for young children—their stories, their thoughtful illustrations, and certainly the magnificence of the women and men who write them.

Oh, what I lot I still have to learn. Thank goodness.

**A beautifully illustrated book about those gardens is Marta McDowell’s Beatrix Potter’s Gardening Life: The Plants and Places that Inspired the Classic Children’s Tales (Timber Press, 2013).