I’ve been to Santiago de Compostela in Spain six times, beginning in 2008. In legend, the city was established in the 9th century AD as the burial place for the Apostle James. (He’s known in English as St James the Greater, and in Spanish as Santiago.)

The city is the capital of the province of Galicia in northwestern Spain. It’s a World Heritage Site and the destination of the famous Camino de Santiago pilgrimage. Its big draw is the world-class cathedral.

In 2008, when I first rounded a corner and saw the cathedral exterior full in the face, I could have fallen on my knees in awe. Its astonishing baroque façade with bell towers—246 ft at their highest—was covered with parapets, do-dads, sculptures, spires, and stylized crosses. It took my breath away.

But it also looked grubby. Dirty. Lichen-covered. Stained. A gold-yellow fungus crawled over its stone face.

Why don’t they take a sandblaster and clean it up, I wondered in my rather ugly-American-ish way. Why don’t they let its beauty shine? It felt like the cathedral was a tarnished teapot in an antique store, not the ornate, high-polish, beloved treasure at an ultra-posh jeweler’s, which it should have been.

In retrospect, I confess to my naivety: Duh! Imagine how much it would cost to renovate? Who would pay for it?

At that time, 2008, I went inside and in the company of hundreds of fellow pilgrims, I meandered through the huge church. I knew I was seriously cathedral-architecture-illiterate. Nave? Transept? Botafumeiro? Ambulatory? Tympanum? Mullion? Pilasters? Rib vaults? Flying buttresses? Multiple chapels? Archivolt? Huh? It was pretty much Greek to me, for I was raised in a Protestant church known for its extreme plainness in style.

But despite my disapproval of religious extravagance, I followed other pilgrims in climbing the stairs behind the altar to embrace for a few seconds the massive, bejeweled back of the St James statue there. I indeed felt huge gratitude for the whole expansive Camino experience. I suspected I’d want to repeat it.

Of course I felt disappointment in behalf of the friends I was with. They didn’t get to see the building without its overcoat of ladders and platforms.  But… 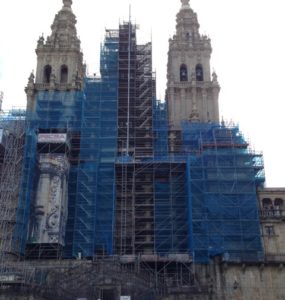 But this year, in 2019…ah!…this year it’s finished. In May I saw the great edifice in its purity. The exterior I mean. I was again awestruck. The stone was clean. The metal grill-work, fixed and beautiful. I tried to capture its beauty from many angles with my iPhone. No way. You’ve got to be there: photos don’t begin to do it justice.

But in 2019, the interior of the Cathedral was mostly impassable. Pilgrims could see hardly any of the huge nave, the noble columns, the varied chapels. They could see the altar only through a grid of pipes and ropes and boards, and if this is someone’s only trip to Santiago, they certainly wouldn’t see the massive incense-burning botafumeiro being swung from on high.

Right now, most pilgrims can’t get near the Portico of Glory (see below), unless they are lucky enough to get a precious guided-tour ticket. They miss that amazing bas relief spread above and across the mullion (pillar) that holds up the figure of a seated St. James, looking like a benevolent grandfather we’d all love.

That Santiago statue has been delicately colored now, like it originally was when created by Master Mateo. The June Spanish edition of National Geographic had it on its cover.

But I’ve decided to quit complaining, even a little, about what can’t be seen now.

Instead, I realize that over the years of my visits, I’ve actually had the great honor to see a magnificent building in historic restoration. It’s something that hasn’t happened in centuries. Yet I’ve personally gotten to track an almost miraculous event—the love-making, of sorts, between a building and its human admirers. And you, dear reader, you can see here a few pictures of evidence of that historic process.

Here’s a tip for you if you’ve read this far: The year 2021 is a Holy Year in Santiago de Compostela. That means it’s a year when St James’ birthday, July 25, falls on a Sunday. It’s a big deal.

A million pilgrims are expected to walk to Santiago that year. For Catholics, it’s a year of special indulgence—all sins are forgiven. The great Cathedral de Santiago will be in spic-and-span glory, outside and inside.

Make your plans to visit soon. It may to be hard to find room in the inn.