I’m house sitting in a beautiful home in the town of Langley on Whidbey Island in Washington State, way up at the northwest tip of America where it’s only a giant’s step into Canada. A large, mature, independent cat named Meatball is my charge, plus a few plants. I like this home and this cat! 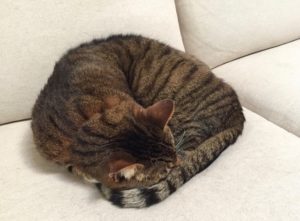 Meatball goes in and out through the cat door, often spending long hours outside. He talks loudly, demandingly, when in need, but asleep, well, he’s all angel. We’re getting along well.

Whidbey is a long squiggly island— a 55 mi road takes you toe to top— in the Puget Sound. One takes a ferry to get to the island from Seattle. When locals say, “We’re going to America tomorrow,” they mean the mainland—where shopping options and prices are much better.

Look to the left (northwest) from lower Whidbey on a clear day in winter and you see the snow-capped Olympic Peninsula; look to the right (northeast), you’ll see Camano Island or the mountains of the mainland coast. 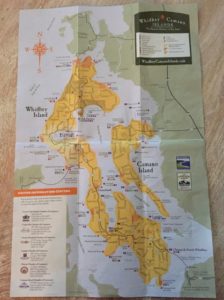 Briefly, Whidbey is the largest island in Washington State. It has small towns—Clinton, Langley, Freeland, Coupeville, Oak Harbor—and several wide-spot-in-the-road villages. It’s sparsely populated; about a third of the population live in rural areas. There are densely wooded spots, farm lands, open “prairie,” and lovely beaches. Outsiders often learn of the island because it has at least five retreat centers that cater to the mindful, the creative, to families and churches, and to those in recovery.

Whidbey is on the orca route to Alaska and there’s a welcoming non-profit, the Langley Whale Center on Anthes Avenue, that’s a museum and store where the public can get a quick overview education. Here they track the orca sightings that people report. It’s a superb place for kid marine-biologists. 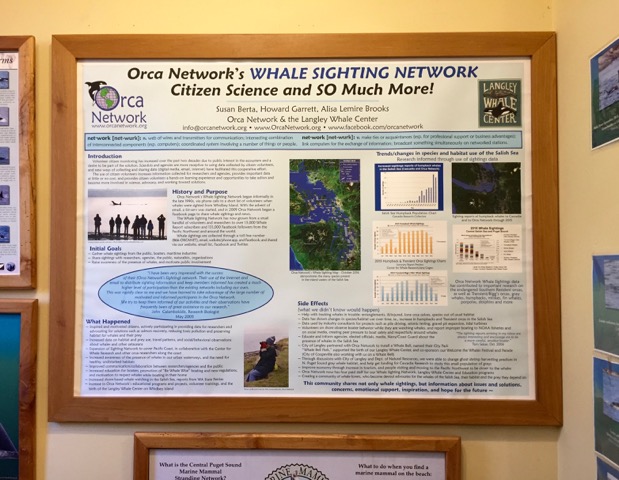 There are plenty of maps and visuals at this Whale Center, plus trinkets,  jewelry, bags–souvenirs for those interested in large ocean mammals and ocean ecology. 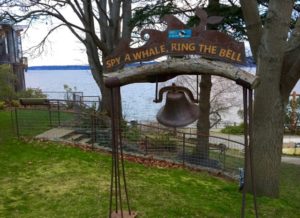 Wouldn’t it be cool to have a orca sighting and get to ring this bell?

The town of Langley where I’m house sitting is a cultured, history-appreciating place with plenty of art galleries, public sculptures, high-end and middle-class homes, a well-used small library, the family-owned Clyde movie theater (that charges $5 for seniors), and even, since 2010, their own Island Shakespeare Festival. Like Washington State, it’s largely a blue town, though I heard that in dwellings deep in the woods, political sentiments may be different. Plus, Langley is home to a favorite poet, David Whyte, though I haven’t had a sighting of him in the five+ weeks I’ve been here.

This year, Whidbey had unusual winter weather. I was lucky enough to be present for a rare, multi-day run of heavy snowfall. Residents hardly knew what to do: it took several days for the roads to feel safely passable; even large stores didn’t shovel their parking lots or sidewalks for walk-in customers; scheduled events were cancelled; schools were shut; people stayed in because walking on ice wasn’t easy. But the world seemed quietly festive, somehow. It amused me, because I spent 26 years in Philly where snow, truly heavy snowfall, is quickly handled for city life must go on. Here in Langley, there seems to be more lee-way: it’s cool for life to slow down and even stop.

For snow-beauty needs to be admired. 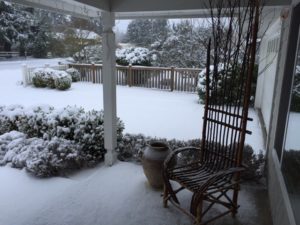 The front porch of the home where I’m house sitting and the snowfall that shut down the town.

Next up: some of the charming public sculpture of Langley.