“So,” I said to a Crestone local, opening the French doors and stepping out to the porch where she stood, hose in hand, watering the flowers around the house where I’m house-sitting, “how long have you been here?”

“I’ve been here 27 years,” she said. We exchanged names. She was polite, but she didn’t take my question as the bait I intended it to be, that is, an invitation into friendly conversation. I sensed that she had no interest in me, or probably more accurately, that she was extremely private. She looked about my age, somewhere between 55 and 75.

But I’m willing to push things a bit to give shy people a chance to warm up, and I continued my questions, “What brought you to Crestone?”

She was quiet a few seconds. Then with a twinkle in her eye, she said, “Well, I once saw a photo [of the place] and there were no telephone poles in it.”

I got it. This woman truly sought solitude; it was her MO and she didn’t need contact with strangers like me. I laughed and backed away from my social inclinations. She smiled a gentle Buddha smile; I went back inside.

And a couple days later I found out that she was the artist of five of the unusual copper art pieces in the house, each with something profound written in Arabic and/or Hebrew. No simple gardener, she. Rather, a highly skilled, educated, sensitive soul who’d chosen decades ago to get away from her native Los Angeles so she could live as she wished. (I’d tell you her name and website, but I haven’t asked permission.)

And so it goes in teeny-tiny Crestone, Colorado. Elevation: 8000 ft. Population: 127 in 2010. (That number doesn’t include the unincorporated area that surrounds the town—the Baca Grande, where another 1100-1500 folks live.)

I’ve been to Crestone before to visit good friends who built a home on the Baca, but I stayed for only for a day or two. Now I’m completing two-and-a-half weeks of house-sitting in a ochre/orange Santa-Fe-style home with a view of the mountains out the back windows and the open stretch of the plains out the front. It’s extraordinary.

To get to this unique spot, you drive about four hours south from Denver (or north from Santa Fe) into the high desert in the center of the San Luis Valley. Off to the east are 14,000-ft. snow-capped peaks of the Sangre de Cristo range, shockingly white if you catch them on a clear day when the sun pours through the happy clouds. If you were a bird, you could wing your way east over the range and soon be in Pueblo, Colorado. To the west of the sandy plain on which Crestone sits are the Rockies. To the south of town is the mind-boggling Great Sand Dunes and its Natural Park and Preserve. It’s all on the fringe of the Rio Grande National Forest.

This is Saguache County (FYI, pronounced sa-WATCH). It’s desert-plains beautiful. But pay attention to your driving if you’re headed for Crestone. There’s a sneaks-up-on-you turn-off from highway 17, between the towns of Salida and Alamosa, onto county road T. Go east about 12 miles, and you’ll come to a three-way intersection and a kiosk labeled Information Center. 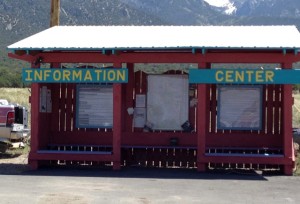 You’re at the north edge of the huge land-grant given to a Spanish family, dating from Civil War days. According to trusty Wikipedia and locals I spoke with, it was originally a cattle ranching area…then gold and silver mining moved it. The actual Crestone town was established in 1880, and for a short time, it thrived. Miners’ cabins, owners’ homes, restaurants, a hardware store, and such were built. But the boom went bust; people left, houses were abandoned, wood warped, and critters moved in.

The population then dropped to 40, mostly retirees and cowboys. In the early 1970s a developer created a 20-sq-mile area, the Baca Grande, south of the town, laid out 10,000 lots (with underground utilities and roads), and intended to sell these lots, sight-unseen, to military retirees. Sales were slow; the project generally failed.

Then something extraordinary happened to this little Colorado settlement. Was it the impact of the energetic ley-lines that reputedly run under this area? Or simply the beauty, silence, spaciousness, and price of land that brought serendipity to Crestone?

A oil-rich multimillionaire Canadian, a man of vision and conscience and a leading environmentalist with the United Nations, Maurice Strong, visited and fell in love with the area. With his wife Hanne, they purchased a large swath of the Baca land and started giving parcels to spiritual organizations. Contemplatives and visionaries came. The population increased; houses were built. Ashrams, stupas, temples, hermitages, retreat centers, a convent, an academy, an institute were established. They were Christian, Zen Buddhist, Tibetan Buddhist, Hindu, and Other—a virtual United Nations of Religions on the Baca. (I may write about those places later.)

Now, Crestone town has several streets, one organic/homeopathic-type grocery named Elephant Cloud Market, one mercantile grocery, a small bank, a post office, an ice cream store that is about to close (according to an owner), a small cooperative artisan gallery, and more. Writers, artists, visionaries, hopefuls, hippies, marijuana growers, ne’r-do-wells, entrepreneurs, and such live here.

In my days here in Crestone, I’ve been taking long walks and exploring. It’s been pretty darn thrilling. In another post I hope (but I’m not promising) to write about some of the spiritual communities I visited. I’ve run across groups I’d never encountered: I guess one is never too old to not be surprised–and never too old to enjoy places of beauty.